The last binary date I will likely live to see (I think) barring medical breakthroughs that extends life a few hundred years, and I will spend it playing Skyrim.

Now the question remains how much time will I spend playing before the lure of looking behind the curtain overtakes me. I give it 2 days.
Posted by Brian Lewandowski at 12:22 AM 3 comments:

A little over a month before Skyrim is released, and I am already 99% sure that it will be my new toolset of choice. I've spent a little time trying to familiarize myself with the Construction Set as a primer to how the new tools will work. I won't lie, it is very similar in concept to Aurora/Electron, but very different in practice.
While I still maintain my best times were had working with NWN/NWN2, I just don't see the viability of it for mainstream appeal anymore. Time is a cruel master and tarnishes even the finest shiny metal. That and I have become quite fond of working within the Single Player experience after my work in NWN2.
Granted, I truly miss the building/running of large multiplayer worlds such as NWNOnline: Cormyr the Forest Kingdom PW from the NWN1 heyday. However, because I have no intention of taking an engine and building an entire game around it, I am limited to what releases and tools are made available. Right now, that looks like Skyrim.
Sooooo Bethesda eh? I hadn't honestly spent much time with them although I am familiar with their work. Never played Morrowind...just "finished" Oblivion to get familiar with the gameplay. Yeah, I think I can make this work.
I may just cast Raise Dead on this blog.
Posted by Brian Lewandowski at 6:50 AM 3 comments:

RWS has been very kind to area design, although I am having a heck of a time with a few tiles. For some reason, there are some key tiles missing from the various RWS tilesets in the all in one package. The placeholder is there for them, but they fail to render in the preview or in the toolset when attempting to place them.

For the most part, I have been able to get around them by using replacements. Although, I do think that the set could be much more versatile if these functioned in the combo hak, as I know that they work for the most part in the individual RWS Tile haks. It almost makes these beauties much like the Shadow Palace tileset....gorgeous, but limited in variation. I know if these pieces worked, that problem would disappear.

Pretty soon, I'll begin to assemble the required non-area hak assets. Sadly, that will have to be a custom hak in the absence of a 'Best Of' compilation that I don't feel would be a unneeded waste. 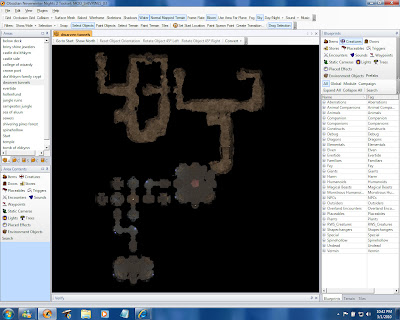 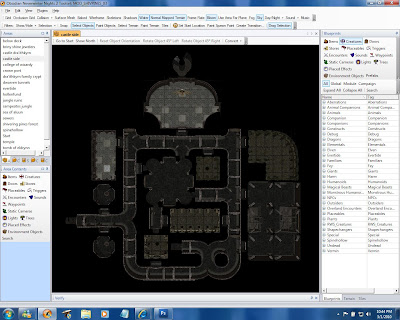 With a title like that, you'd think I was about to make my Mass Effect 2 confessions. So what if I sent Jacob to his death in the ventilation shaft. I'm pretty sure he was messing around with Miranda and got snippy with me about it. That and I like to have the weapons room all to myself to roll around on the ground with my sniper rifle. (oh, and as the ultimate in jerk moves, I dropped Miranda for Tali, then Jack after we saved the universe...sheesh, how's that for cold-blooded renegade?)

Besides that little incident and losing Legion somehow (I must have missed a transmission), we all got out alive. If you don't know what I'm talking about, get Mass Effect 2! Also, don't believe the message that has enhancement advertisement to become big like Krogan, that stuff doesn't work!

No, the title refers to the effort to make this latest NWN2 project a more diverse affair. I've had great fortune in the meeting of Jason D Smith aka shmity72, who has agreed to help put this thing together. There is another individual working through some WIN7/Toolset issues who I will announce as soon as I ask his naming preference.

Is the team complete? Heck no! Join up if you get the development itch. The more minds that collaborate on a project, the grander it becomes (to a point of course). I'd love to have a well rounded team who can get their hands dirty on all of the many aspects of building an adventure. There's plenty to go around, I assure you. I also promise not to send you into a ventilation shaft to override a blast door.

RIP Jacob, I just couldn't trust ya after seeing what your dad did on that planet. Why do you think I never left you alone on the ship with Miranda?
Posted by Raith Veldrin at 12:37 AM 12 comments:

Anyone who's thumbed through the in game Tome of Koth knows that I'm a pretty big fan of pseudo-science and trying to attach semi-plausible explanations to certain elements of a fantasy setting. There's a pretty strong 'Unified Field Theory' involved in the gameworld that tries to further tie together matter, energy, gravity, time, magic, sound, etc. Thus the reason that bards can cast spells, or bards + mages = altered boom. Even the reason that the Ruins of Solvheil are a giant divot in the otherwise flat plane of the material world with everything bending around it.

There are a few good shows that also explore some of these "maybe this is why, and, what would happen if" situations. At least one of these has caused me to spit coffee across my desk, curse at my television, and rewrite things midstream because some elements were getting a little too close for comfort lol. Another reason that I'm glad the SoS trilogy is for the most part, done.

I've often thrown things into the story that were asides from my bad habit of watching the History channel (ala the Dwarven Bagdad Battery, or the Nalassian cliffside watermill). So here's another little tid-bit that will feed into the current adventure.

Silver, often revered in ancient times for its healing qualities (true) is the reason that it is a powerful ally against such afflictions such as lycanthropy or the undead. It's pure healing power is a bane to the sicknesses that twist and rot.

Silver was sometimes ingested which in some extreme cases, caused a blue tint to the skin (true). Now here's the rub:

A lycanthrope/undead hunter NPC of a sacred/secret order. This order of hunters ingests silver to purify themselves and cause their very bodies to be toxic to their prey. Naturally they sport the vague blue hue to their skin, and wear a cool looking Van Helsing-ish hat (well, maybe). I envision them using a heavy crossbow with wooden or silver-tipped bolts/stakes as they drop their foul foes. While not clergy, they do employ the divine tools of the temple such as holy-water, symbols, etc.

I've also been toying with the idea of this particular hunter companion to be taking the silver supplements to contain something within themselves as well, perhaps something to reveal late in the module as they utilize this innate ability in combat/cutscene.

This is one of those framed-out ideas that I just haven't had a chance to go flesh out. I figured I'd throw it out there to see if anyone had any suggestions or holes that could be shot in the idea before I get over that way.
Posted by Raith Veldrin at 12:32 AM 8 comments:

Tomb of Eldrynn and Mini-Map Lament

This is the Tomb of Eldrynn which lies partially hidden in the Great Forest of Dalreon. Again, this area is far from finished from a detail standpoint, but just getting the tiles in place and a few key objects sets the tone and allows me to feel like a little progress has been made.

The party visits this area pretty late in the adventure after learning that the key to defeating their undead adversary is finding a weapon used to injured them in their mortal life. How's that for semi-spoilertastic?

Now, on to my lament. I will never be able to use a mini-map until I can keep myself from jumping all over hell and half of Georgia. I seem to have this problem with writing stories that require long distance travel, like across the continent long. Maybe I should use the ole Indiana Jones airplane map effect.

Anyhow, I have always wanted to use a mini-map. I even made one long ago for the Isle of Sampeatos, although it just wouldn't work for the kind of location hopping that all of the adventures that I've written require. I will have to make myself the same promise that I've used to cheer myself up before: Next time. 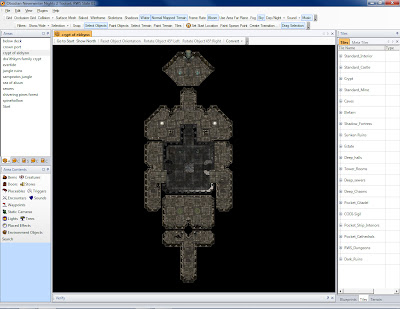 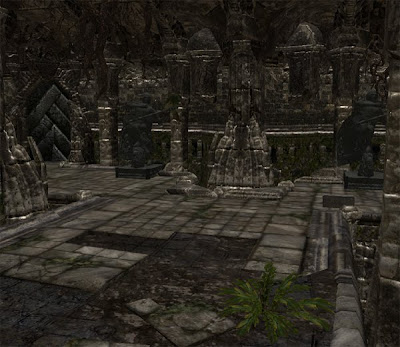 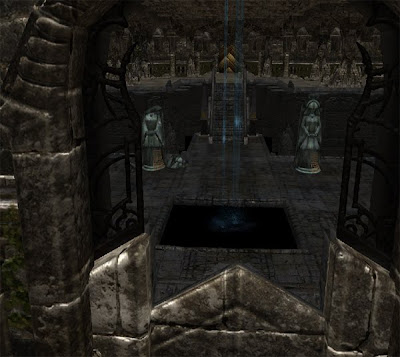 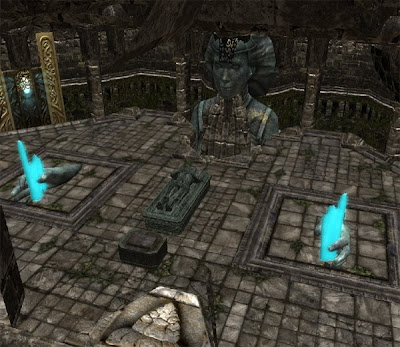